The COVID-19 Vaccines and God’s Providence

At last. There is light at the end of the tunnel.

The ride has been long and dark. And there is still a ways to go before we exit to the other side, but we will arrive there soon.

The emergency approval and first distributions of the Pfizer-BioNTech and Moderna COVID-19 vaccines give us all hope that we will soon see an end to the COVID-19 pandemic and return to some semblance of normalcy by the end of 2021.

As a biochemist, I find it a remarkable achievement. Within the span of months, we have gone from experiencing the first cases of COVID-19 in the US (most likely in early 2020) to having two vaccines that appear to be highly effective against the SARS-2 coronaviruses less than a year later. Prior to this accomplishment, the fastest that we have been able to develop a new vaccine is four years.

This success reflects the resolve of governments around the world who have worked collaboratively with public and private research teams. It also reflects the hard work of life scientists and biomedical investigators who have labored tirelessly around the clock to understand the biology of the SARS-2 coronavirus, translating this knowledge into public health policies, treatments for COVID-19, and ultimately, vaccines to prevent infections and halt the transmission of the virus.

As a Christian, I see a divine hand in the rapid development of the COVID-19 vaccines, reflecting God’s providential care for humanity.

To fully unpack this theological idea, I need to begin by describing the science that undergirds the Pfizer-BioNTech and Moderna vaccines and offer a brief history of messenger RNA (mRNA) vaccines.

Both the Pfizer-BioNTech and Moderna vaccines belong to a category called mRNA vaccines. The chief component of these vaccines is a laboratory-made mRNA designed to encode a viral protein, usually one that resides on the virus surface. (Both the Pfizer-BioNTech and Moderna vaccines contain mRNA that encodes the SARS-2 coronavirus spike protein. This protein coats the virus surface and plays the central role in the binding and entry of the virus into the host cell.)

Vaccines made from mRNA were first proposed by life scientists in the early 1990s. The principle behind mRNA vaccines is straightforward. Once injected into the patient, the mRNA finds its way into immune cells, where the cell’s machinery translates the synthetic viral mRNA into copies of the viral protein. Some of these newly made proteins are broken down inside the cell, with the fragments becoming incorporated into major histocompatibility complex class I (MHC-I). The MHC-I is transported to the cell surface, becoming embedded in the plasma membrane. Here it presents the viral protein fragment to the immune system, triggering a response that leads to the production of antibodies against the viral protein—and, hence, the virus. Initially this process provides sterilizing immunity. More importantly, it triggers the production of memory T cells and memory B cells, providing long-term immunity against the viral pathogen.

Once the viral protein is translated, the synthetic mRNA undergoes degradation. Once this breakdown occurs, the mRNA component of the vaccine becomes cleared from the patient’s cells. 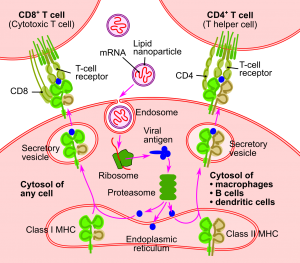 “Schema of the RNA Vaccine Mechanism” by Jmarchn is licensed under CC BY-SA 3.0

While the principles behind mRNA vaccines are straightforward, life scientists have faced significant hurdles developing workable vaccines.1 These technical challenges include:

Despite these serious challenges, life scientists and biomedical researchers have continued to pursue mRNA vaccines because of the significant advantages they offer compared to both conventional and putative next generation vaccines.

Some of the advantages of mRNA vaccines include:

Compared to DNA vaccines (which are being pursued as a potential future generation vaccine type), mRNA vaccines have virtually no risk of modifying the patient’s genome—in part because mRNA will degrade once it has been translated, never making its way to the cell nucleus.

Over the course of the last decade or so, life scientists and biomedical researchers have learned ways to overcome many of the technical issues that are endemic to mRNA vaccines. In fact, by the end of 2018, researchers had successfully developed mRNA vaccine technology to the point that they were on the verge of translating it to widespread therapeutic use.

Through these efforts, researchers have learned that:

Even though the Pfizer-BioNTech and Moderna vaccines represent the first-ever mRNA vaccines used on humans, they took nearly three decades to develop thanks to the tireless efforts of life scientists and biomedical researchers. This developmental history includes numerous studies in which their safety has been assessed, leading to significant improvements in vaccine design, ensuring that any adverse reaction to mRNA vaccines is negligible.

The COVID-19 Vaccines and God’s Providence

This concerted effort has paid off. And, in large measure, these previous studies have made it possible for the Pfizer-BioNTech and Moderna scientists to rapidly develop their COVID-19 vaccines. At the point when the COVID-19 outbreak was declared a pandemic, researchers had already developed mRNA vaccines for a number of viral pathogens and tested them in animal models. They had even progressed some of these vaccines into small-scale human clinical studies that included safety assessments. Bioengineers had already started work on pilot scale production of mRNA vaccines, along the way developing GMPs (Good Manufacturing Practices) for the manufacture of mRNA vaccines.2

In effect, when the pandemic broke, all the researchers at Pfizer-BioNTech and Moderna had to do to develop their COVID-19 vaccines was to know the right sequence to use for the vaccine’s mRNA. In other words, the scientific and biomedical communities just happened to be poised and ready to go with mRNA vaccines when the first outbreaks of COVID-19 appeared around the world.

So, 30 years of painstaking research allowed several groups of scientists—including a group at Pfizer working with a German company called BioNTech, and a young company in Massachusetts called Moderna—to bring mRNA vaccine technology to the threshold of actually working. The companies had built platforms that, theoretically, could be used to create a vaccine for any infectious disease simply by inserting the right mRNA sequence for that disease.

Then along came COVID-19. Within weeks of identifying the responsible virus, scientists in China had determined the structure of all of its genes, including the genes that make the spike protein, and published this information on the Internet.

Within minutes, scientists 10,000 miles away began working on the design of an mRNA vaccine. Within weeks, they had made enough vaccine to test it in animals, and then in people. Just 11 months after the discovery of the SARS-CoV-2 virus, regulators in the United Kingdom and the US confirmed that an mRNA vaccine for COVID-19 is effective and safely tolerated, paving the path to widespread immunization. Previously, no new vaccine had been developed in less than four years.3

We were literally at the point of matriculating mRNA vaccines into large-scale human clinical trials at the precise point in time that the COVID-19 outbreak began. If this outbreak occurred even a few years earlier, I question if we would have been able to develop effective mRNA vaccines against COVID-19 with the same speed and have the capacity to rapidly produce and distribute large quantities of vaccines once the mRNA vaccine was ready to go. The rapid response to the COVID-19 pandemic has been made possible because of the advances in mRNA vaccines that have occurred over the course of the last few years, yielding the technical knowledge to rapidly develop and manufacture mRNA vaccines. In fact, some biomedical scientists consider mRNA vaccines to be the ideal vaccines for this reason.

As a Christian and a biochemist, I can’t help but see God’s providential hand at work in the timing of the COVID-19 outbreak. It happened precisely at the time that advances in mRNA vaccines would allow for a rapid response. The remarkable confluence of the COVID-19 pandemic with the advances in mRNA vaccines has one of two possible explanations: It’s either a fortuitous accident or a reflection of God’s providential timing and faithful provision to humanity.

As a Christian, I choose the latter explanation.

You might say that mRNA vaccines were prepared in advance for such a time as this.

Originally published at Reasons to Believe.